I've got this guy with whom I work. Since he needs a blog name, let's call him The Friendly Jerk. He's nice and all, but he manages to say some pretty rude things, like when he asked me incredulously, "How do you pass your performance reviews?"

Anyway, our company did some work for an organization that was putting on a run here in town, and as a "thank you," the organization gave us two free entries. The Friendly Jerk was going to use one of the entries to run the 5K, and he asked if anyone else wanted the other one. I didn't know there was a 5K component; I'd only ever seen fliers around town that billed the half-marathon component. I said, "For the half marathon?" He said, "Well, I was thinking 5K, but if you think you can do a half marathon, be my guest." I said, "Yeah, I could do that."

Now, here's the important part: I really could do that. I ran cross country in high school, and although I broke my ankle in 1996 and have not run that regularly since then, I'd run 10 miles as recently as two years ago. Also, since I've become a bike commuter, my heart and lungs are in adequate shape already. With several weeks of preparation, I could run a half marathon.

Well, The Friendly Jerk nearly crapped his pants in disbelief. "You think you can run a half marathon? Are you even a runner? What's the furthest you've ever run?" And so on. So, obviously, I had to run the half marathon, just to shut him up.

So I signed up and began a bit of training. The training was geared towards running a marathon in October (which, depending on how the surgically-repaired ankle holds up, is another goal of mine), so it was going to be a little bit of a stretch to run a half marathon in April, but not too bad. 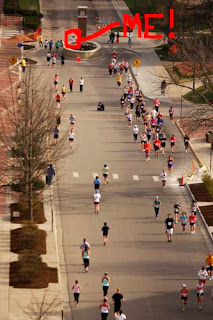 There were highlights, however:

Lowlights: my time wasn't too impressive, while The Friendly Jerk finished in the top 20 for the 5K. Part of me wants to go head-to-head with him in a 5K, because I'm pretty sure I could beat him, but I don't want to turn into a jerk myself.

Your nipple chaffing thing reminded me of Andy on the Office - I hope it wasn't as bad as his.

You gotz to toughen them titties up bro... they just need more love and attention to callous them up!