In other news, I’m so bored that I’ve begun poisoning my co-workers. Maybe. I’m too bored to even find out for sure. All I know is last Saturday I was supposed to do a lot of studying, which meant that instead I did a lot of cleaning. In all my cleaning, I found some coupons that were still valid, one of which was for a large pizza from the Hy-Vee deli. (Let’s hear it for Hy-Vee, people! Hy-Vee is my favorite grocery store ever. Yes, you heard me, I even like it better than Aldi.) Anyway, I went to Hy-Vee that night to get a pizza for our supper, and while I waited I picked up two bags of sun-dried fruit. Earlier this week I ate the apricots, half of which were delicious while the other half were just okay. Today I started eating the pears.

Here’s the thing about sun-dried pears: they don’t really taste like anything. And it wasn’t just a hit-and-miss problem like with the apricots; they all tasted like nothing. I’m guessing this is pretty typical for pears (I’ve never actually eaten a pear, I believe), since it is impossible to find pear-flavored candy. Well, I decided to tough it out and eat the freaking pears, since I’m all healthy and whatnot these days, but one of my friends at work came over to my desk, had a sun-dried pear, and raved about it so much I let him take the bag away with him.

Now he’s IMed me asking if they need refrigeration. What do I look like, the USFDA? So I told him I didn’t think so. For all I know, he could be dead by now.

But now that we’ve come around to talking about me, let’s keep this ball rolling. I’m incredibly bored, and very tired. My fatigue is such that my eyelids are twitching again, and it takes me weeks to get that crap to go away, so I’m pretty pissed about that. But here’s something I’m happy about: today’s Kansas weather. It’s a beautiful day here today, not even windy, and my bike rides to school and work were incredibly enjoyable.

Now let’s talk about the things I think would be fun to own. One of them is this scooter. 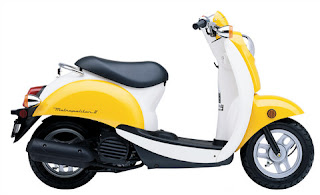 Straight baller, y’all. (I don’t even know what that means.) The other is this car. 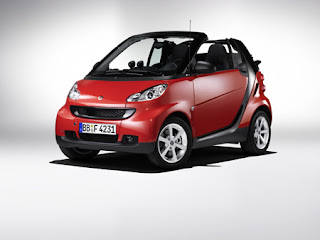 While it may seem impractical for someone with three kids to buy a two-seater car, I have to think ahead to the days when I’m once again somebody’s wage slave in a fluorescent-bulb Devil’s antechamber. I’m livin’ the dream, people!