Why Must You Make Me Love You? 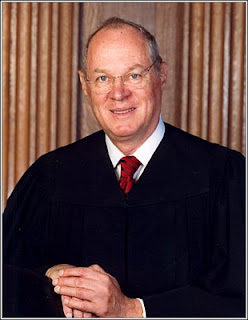 Firstly, he was the deciding vote in Planned Parenthood v. Casey, keeping American fetuses on their toes (or are they just ten extra toes the mother decided to grow in her gut?) since 1992. Now, today he was the deciding vote in Kennedy v. Louisiana (they now name cases after the justice assaulting the state's rights and the state he's assaulting), allowing child rapists to live out their natural lives watching cable television for free. (Someone should tell these two Utah girls there's an easier way to get their cable turned back on.)

In response to the embarrassment that is Anthony "At the heart of liberty is the right to define one's own concept of existence, of meaning, of the universe, and of the mystery of human life" Kennedy, Barack Obama threw the Democrat Party playbook aside and spoke with common sense: "If a state makes a decision that under narrow, limited, well-defined circumstances the death penalty is at least potentially applicable, that that does not violate our Constitution." (This also gained him points with Persephone, who would love to serve on a capital punishment jury because there'd be the chance they'd let her throw the switch herself.)

Meanwhile, Bob Barr just has facial hair. It's time to step it up, Barr. Obama's winning my vote, like he's already won my heart.

Ugly mofo anit he? Obama definately wins the looks competition with this guy. Lets be honest, thats why the democrats vote the way they do, and love their celebrety spokespeople so much, because good lookinig dems are definately the minority, case in point, Madaline Albright WHOA!

Then again, McCain aint exactly a looker either, his wife on the other hand...not so shabby, I guess its the good looks that makes the infedlity "excusable"?!?

I want to become a supreme court justice just so I can be known as a "swinger" uh... I mean swing vote guy.

"Controversy
Barr was once photographed at a fundraising event licking whipped cream off the chest of a woman.[63] He said he was raising money for leukaemia research."

Libetarian fund raising sounds interesting, maybe my wife and I should attend the next local meeting.