Still the best online mapping application is...me. Here's a map of our most recent travels. 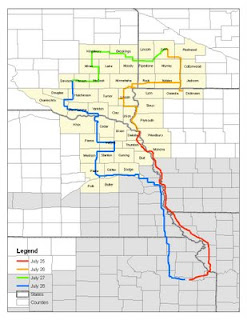 July 25: after my finals I came home and loaded the family in the car and we left on our vacation. Our kids really love the new Weezer album, so I thought we'd turned a corner in terms of their refusal to listen to music on car trips. I remember my family car trips when I was a kid, and they consisted largely of driving thousands of miles while listening to the same two Oak Ridge Boys tapes. Why can't our kids be satisfied like we were when we were kids? Anyway, I put on the blue album and our kids started complaining. I said, "I thought you guys were Weezer fans now," and Crazy Jane said, "We only like the new album." But we ignored their complaints and listened to Weezer for the entire drive, in chronological order: blue, Pinkerton, green, Maladroit, black (the second album of the 10th anniversary blue album), Make Believe, and then red.

Baby X got a new state in Iowa, and then another in Nebraska when we went to the Winter Quarters Visitors Center to feed him a bottle and let the other two kids use the restroom. Here's what I don't like about Mormon visitors centers: they don't let you just walk through. They either think I'm not a member or else they want me to give them a referral. The horrible thing is, I have no testimony of missionary work (and I don't really want to get one). My mission taught me a valuable lesson: it's a waste of time trying to get people to do things they don't want to do on their own. I spent two years wasting my breath. When someone wants to find out more, that's great, but otherwise they just get angry and you get frustrated. So we stopped at the visitors center and they made me feel like I had to give an excuse for using the restroom, and then they gave me guff about not wanting the tour. I went through the exhibits with Crazy Jane and Articulate Joe while Persephone and Baby X finished up their stuf/p>

A little further up the road we drove through Blencoe, Iowa. Last year some homeowners there were giving away a house in an essay contest. It was the second home essay contest we've entered, and the second one we lost. I think the winner was some under-privileged grandmother raising two grandkids or something. I mean, how do you compete with crap like that?

After that we crossed the Missouri again to get some new counties in Nebraska. It was a toll bridge made out of steel plates that wobbled when you drove on them. Persephone was freaked out by the fact you could look down and see through the bridge, but she liked that the toll booth operator was an old man who looked like he enjoyed his job. She said, "I'd like to do that job, but I'd get stressed out by the people who didn't have the money for the toll and I'd just let them go past and I'd get fired." But I don't think they would be that big of sticklers, since the toll was advertised on a cardboard sign that read, "Cars 75." Persephone said, "Does that mean they can only have 75 cars on the bridge?" I said, "I think that means 75 cents." Incidentally, the Decatur, Nebraska, website has this to say about their bridge:

The village of Decatur received nation wide notoriety in the 1950s because of the famous dry land bridge that was supposed to be across the Missouri River. The original plans were to build the bridge across the Missouri River to connect Decatur to Onawa, Iowa. The river, on the other hand, had different ideas and changed its course thus leaving the proposed bridge site about a quarter of a mile distant from the river. Plans were changed and the bridge was built on dry land with the river to be rechanneled under the bridge upon completion. The bridge was completed in 1951, but because of the Korean War, Federal funds could not be appropriated to place the water under the bridge. The $2 million bridge soon was well known as the bridge "that went nowhere, because it lost its river." Funds finally became available to move the Missouri River under the bridge and the first traffic crossed the bridge on December 19, 1955. The bridge was officially opened May 5, 1956 during Decatur's Centennial.

Then we drove through Thurston County, Nebraska. The entire county consists of Indian reservations, and it was all beautiful. I said, "How did the Indians end up with the most beautiful part of Nebraska? I thought we made them leave all the good parts." Somehow the Indians pulled a fast one, there. I feel like we white people got cheated.

Then we came in to Sioux City, an area that has always fascinated me because (nerd alert!) it's the only place in the country I know of that has a city, a "north" city, and a "south" city and they're all in different states (Sioux City, Iowa; North Sioux City, South Dakota; and South Sioux City, Nebraska).

We got to our friends' house and they took us to Palmer's candy factory. I said, "What are they known for here again?" The wife said, "The Twin Bing, but it's horrible!" Then she realized maybe she should have said that last part a little more quietly. I guess the Twin Bing is a delicacy in "the Siouxland" (as I found out the tri-state region is called), and bad-mouthing it is frowned upon.

It's super late and Persephone is bugging me to go to bed, so I'll have to write the rest tomorrow.

Hey, I was curious. Do you use a GPS? We just got a garmin and I really like it.

I always think we should get one, he'd really like it. But he's like a walking GPS so it would be pointless. And he likes to look at the paper maps, etc.

It would be nice to have one for the "find me the nearest McDonald's" or whatever, feature.