Book Review My Wife Will Hate 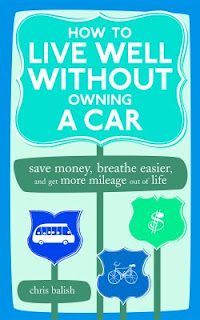 [Actual cover is quite orange, but teh Interwebs aren't cooperating with me right now.]

One day at work last month I read an excerpt from the book How to Live Well Without Owning a Car, by Chris Balish. I was intrigued, yet poor, so instead of buying the book, I checked to see if our local library had it.

They didn't, but our library gets mad props (do the kids still say that?) for pretty much buying any book (or TV show on DVD) any patron requests, so a few weeks later I had a brand new copy of the book waiting for me to pick up.

I like this book. It contains no earth-shattering information, but it helped clarify what I guess I already knew (which was why I read the excerpt in the first place): our car costs more in hassle than it provides in services.

We had a car when we got married, but it started to break regularly. Two months in a row we had to spend over $400 to repair it. I thought, "That's a new car payment." It didn't make sense to be making payments for an old car that was getting older when I could be paying the same amount of money for a new car. And when most auto manufacturers were offering zero percent interest (thanks, al Qaeda!), we bought a new car.

I realized soon after that we were paying for the car without paying ourselves for the depreciation. The best way to own a car, I guess, would be to buy it outright and then make monthly "payments" to myself to save for a new car when the current one broke. When I drove to Redlands for work and my employer gave me fifty cents per mile, it looked like I was making money, but really I was getting paid for the tiny bit of breaking my car had done on the trip, and if I was being honest, I would put that money aside.

Anyway, when our car was paid off we still had car related expenses. There's only so much that can be done by changing driving habits. The best way to eliminate those expenses is to eliminate the car.

Needless to say, Persephone hates this idea. I've conceded that we won't do anything until at least next year, when we will (I hope) move to Washington, Pittsburgh, Philadelphia, New York, Boston, Saint Louis, or Chicago. (Persephone has a whole different set of worries about living in a big city. This is a woman who went to London basically by herself for a summer. Now she gets the shakes just driving to Topeka. Well, not quite, but sort of.)

Today while at work I was IMing Persephone (I told you, I do very little work) and sent her all kinds of information about Zipcar, a car sharing company that operates in most of the cities we could move to. She is interested in the idea, but not on board with the carfree lifestyle. At least not yet. If it's like everything else in our marriage, she'll eventually decide it's a good idea, but by then it will be too late because I will have heard for six months how much she hates it, so I'll keep saying to her, "You're angry with me for making you do this," and she'll keep saying to me, "No, I like the idea," and I'll keep saying to her, "No, I know you really hate it; you used to say so yourself."

The good news is that, on Balish's recommendation, I have the book Divorce Your Car! by Katie Alvord waiting for me to pick up at the university library. Maybe if I read enough of these books Persephone will pick up the salient points.

We are down to 1 car. I ride the train. I wish that I could convince my wife to let us keep it to 1 car, but she wants more kids and we simply cannot all be accommodated in our present vehicle. Even more unfortunately, we will never get rid of the one car we have because it was her high school graduation present. It is worth nothing and runs great.