I'm a Freaking Gourmand, or Whatever

Persephone spends 87% of her waking hours reading blogs like this one, where the bloggista just happens to whip together a 20-course meal while taking professional-grade photographs of each step in the process. I don't begrudge Pioneer Woman her lifestyle, I just wish she didn't have it and I did. Well, I guess that's basically begrudging. I'd say, "So sue me!", but that's not the hyperbole it used to be and I can't afford to defend myself in a frivolous lawsuit, so don't.

(Aside: Regarding frivolous lawsuits, I walked past a woman on campus today who was wearing a shirt that said "FREE HUGS." She was talking on her cell phone, not paying attention to anything. I was very tempted to walk over and hug her, but I figured I'd lose my teaching position, even though she was freaking ADVERTISING that I should hug her! Life, like many other things, is not fair, and that's why our kids aren't allowed to say anything is not fair. Crazy Jane has said, "You make it hard to speak with all the things you don't let us say." Just as long as she doesn't say it's not fair, I'm cool with it.)

Anyway, this morning I opened a banana for breakfast and realized it was too mushy for me to eat it without gagging, so I made a bowl of oatmeal to put it on. When the oatmeal was done and I cut up the banana on it, I thought it was very stylish and deserved a Pioneer-Woman-esque write-up. I went to find the camera (the auto-focus feature being primarily responsible for the out-of-focus picture that follows), thought about documenting my family while they slept, decided to do that on a different morning, and then took the oatmeal picture. So here it is: 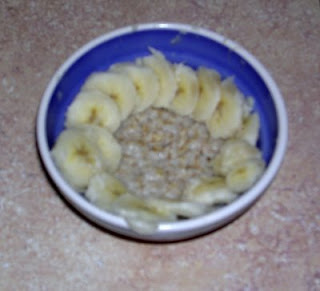 Today's secret ingredient is...[dramatic music and sword play]...BA-NANA! I followed the directions for the oatmeal that my wife cut out of the box and put inside the oatmeal container so I can always find them. Then I cut up the banana. Then I ate it.

I like to think that I would have hugged the girl. In my heart of hearts I would have done it. But I am a chicken. Also, after having been married for so long and adopting the more formal cultural traditions of married mormons (e.g. avoiding a private in-depth conversation with a person of the opposite sex, or getting scared when you find yourself alone in a room with a person of the opposite sex) I would be afraid that I wouldn't know how to do it. My hug machine has worn itself into incompatibility with other huggers. Even if it were possible to have hugged, I might have had a mental breakdown after doing so due to the violation of the awkward code mentioned above.

The oatmeal and the counter look exactly the same! What a send up of the blogs our wives read.

I'm pretty sure it's "bon apetit!" by the way. But of course, what you have there is funnier.