My wife, a vigilant reader of my blog, texted me this photo from the doctor's office last week. 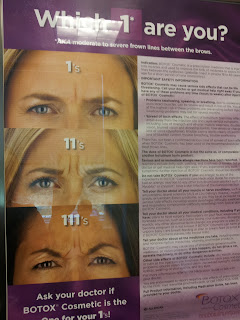 So many things to notice.

First, there's no need for an apostrophe between the "1" and the "s." It is possibly helpful when writing something like, "Most of the students received As on their papers," to avoid confusion between the plural of "A" and the word "as," but with numbers, there's no such possible confusion.

Second, I look at these three women and I think, "They're just frowning with different intensities." Don't you think the "1" lady could be a "111" if she was angry enough? See, first she comes home and finds her dog on the sofa. She's a 1. Then she sees her dog has crapped on her sofa. She's an 11. Then she finds her dog crapped her mother's ashes which he ate from the urn he knocked over. Now she's a 111.

Third, doctors are seriously hocking Botox now? I thought Botox was a poison. [check] Yep. "It is the most acutely toxic substance known...." Sounds perfect for countering aging. Like The Who said, "I hope I die before I get old."

Fourth, how's this for better anti-frown line advice: don't frown in public. Maybe if you weren't going around so angry, you wouldn't have to deaden your facial features.

PS: my wife wasn't at the doctor to get Botox.