Sunday in Philadelphia, a federal parasite employee told us, "The Thaddeus Kosciusko house is set to close at the end of the month due to Sequestration and we don't know when it will reopen, so if you want to see it, you should do it now."

I could have said, "Really? Your budget will go up while prices are going down and somehow you can't afford to run all the locations you ran in the past?" But instead I took it as an excuse to visit the smallest national park in the nation, even though it would not really interest anyone in my family but me.

But he also pimped. And as was commonly said in 18th-century Philadelphia, "Of a truth, pimpin' ain't easy." 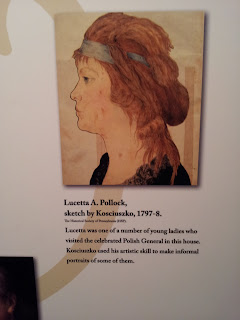 Are those VD lesions on her face? Nice eye for detail, T-Kosz.

Just in case you can't read between the lines, you can push a button and hear a voice actor playing Kosciusko's valet give a brief narration of life in a boarding house. The valet gives a sardonic laugh when he mentions the women who would stop by to see his boss.

The building has two staircases so the human crush can find an outlet (in our 40-minute visit, we got there right as someone else was leaving and then we left right as someone else was arriving). Also, it allows for routing through the "gift shop" (a half bookshelf with more books about Casimir Pulaski than about Kosciusko). Even at the nation's smallest national park, you have to exit through the gift shop.