At the 1999 MTV Video Music Awards, Will Smith said, "See? I got a successful album, and I didn’t have to curse off or talk about violence." In response, Eninem rapped in "The Real Slim Shady,"

It's an interesting admission that Will Smith and Eminem are not producing substitutes. Product differentiation allows for producers to exercise more market power, because they are more like monopolies. Eminem is the only place to go for an Eminem rap, and if Eminem tried to mimic Will Smith, he's convinced his albums wouldn't sell.

What's even more interesting is the placement of the expletives: by placing them immediately after the admission that his sales depend on their presence, it's like they are only there for the sales. The profanity is not there because of artistic license, but because of economic necessity. It's like Steve Martin showing up at a celebrity golf tournament and saying, "Well, exCUUUUUUUUUUUUSe ME!" It doesn't fit the moment and as such means nothing but, "I'm Steve Martin and you want to hear Steve Martin say this."

Lastly, notice that Eminem doesn't just have contempt for Smith's criticism of Eminem's obscenity, but for his public who ostensibly want to hear it. It's like Eminem feels forced to play a character that hates his public, which makes him hate his public, which makes his character more believable. Imagine interupting Don Rickles's anniversary dinner to ask to be insulted. He'd insult you, but not as an act. Eminem hates Smith for criticizing his business model, and he hates his fans for supporting the model. 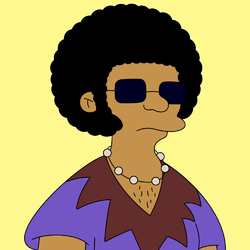 If the profanity isn't genuine, is it still satisfying? Is this just spurious product differentiation, which is not welfare enhancing? If we remove the F-words, are Will Smith and Eminem in perfect competition, selling albums at marginal cost?

Probably not. There's more than just a few F-words differentiating "Stan" from "Gettin' Jiggy Wit It." But raps about the market structure of the rap industry don't have much of an audience, without a few obscenities thrown in.

NB: In junior high I wrote a report on "Obscenity and Censorship," and in my usual half-ass style back then (things are different now?!), I misspelled both "obscenity" and "censorship." But I totally nailed the spelling of "and."