What Is the Sound of One Banana Hammocking?

The last time my wife was out of town for a while, I bought a banana hook for the kitchen. (Those are the types of over-the-top surprises I pull out; being married to me is such an adventure!) It wasn't until I reached the end of the banana bunch that I realized the hook has a problem: what to do with the last banana? 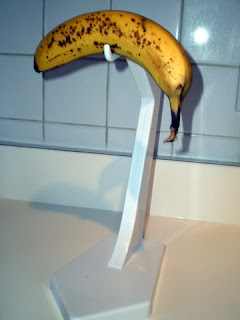 Hanging bananas on a hook requires at least two bananas (unless you impale the final banana on the hook like Shaka Zulu).

I've since moved beyond the balancing solution: when I'm going to eat the next-to-last banana, I use scissors* to snip the banana from the bunch, leaving the final banana attached to a stub for hooking purposes.

* = When I lived in Wisconsin, I discovered people there use the word "scissors" as a singular noun. "Will you hand me a scissors?" they would ask. When I asked for a "pair of scissors," like a sane person should, they would ask "What are you going to do with two of them?" For some reason, they used "pair of pants" in the normal fashion; it was just "pair of scissors" that was too much for them.