Hugh Nibley died in 2005. Twitter was founded in 2006. Yet I follow @HughNibley. Not to worry, these aren't tweets from beyond the grave; someone (evidently one of Nibley's children) tweets quotes from Nibley's writings.

Yesterday, after posting about the tendency to read blame into scriptures about faith and despair, I checked Twitter, where the following Hugh Nibley tweet awaited: 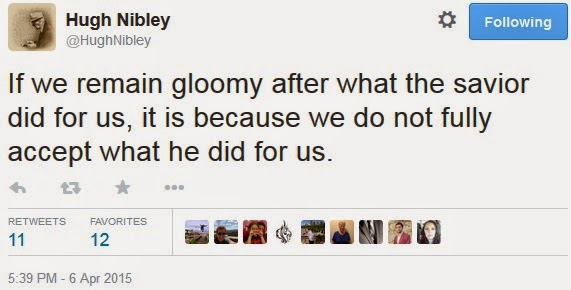 And yet it is a very succinct accusation of faithlessness leveled at the depressed. Yes, the Savior took upon him all our sicknesses and infirmities, but people still get sick, and some of them chronically so. Jesus can heal, but should we tell the diabetic or the cancer-stricken that evidently they do not fully accept what Jesus did for them? After all, some have the faith to be healed (D&C 46:19), and the sick must not be among them.

I submit that gloominess is as much an evidence of faithlessness as is a dialysis machine. And yeah, I know, 140 characters, but if something can't be tweeted without space considerations doing this much violence to the truth, maybe it shouldn't be tweeted at all.

David Archuleta had to launch some sort of apology on FB because a quote he tweeted got split up, unintentionally emphasizing something unpopular with the masses. I can never fit what I want to say in a Tweet without using improper grammar.