Cleaning, From Another Angle

Even though China has so much surplus labor that every grocery store has dozens of employees roaming the aisles, my school has a skeleton crew of cleaning people. They are in charge of the restrooms and the hallways. They used to take the garbage out of the teachers' offices but then they stopped for several months before just recently starting again. But when it comes to the classrooms, they do nothing.

This is supposed to give the students opportunities to serve. However, since the rich only-child special snowflakes have ayis (maids/all-purpose gofers) at home, they have never been forced to clean up after themselves in their lives. And since the students are required to be at school from 7 PM to 9 PM without adult supervision, the classrooms get destroyed at night and the day-time students resent having to clean up the mess the next morning. So our classrooms are pigsties.

The classrooms have a posted cleaning schedule. It is entirely in Mandarin characters. Just to reiterate: this is an "international" department, and all teaching and business is supposed to take place in English. If the schedule was at least in Pinyin, I could read it. By posting the schedule in characters, they made sure it was accessible to everyone except the teacher. (Later, I found out that the kids scheduled to clean my room aren't even my students, so I don't know them and don't know how to follow-up on their lack of cleaning.)

Half-way through the year, the school had a group of students make a humorous instructional video. The premise was that a Hygiene Angel can magically appear and beat especially-foul students. (One of my students played the role of Hygiene Angel.)

The video got a lot of laughs when it was screened, and then the classrooms remained just as dirty. So I added something to the board above the trashcan: when the trashcan was empty, it read "The Hygiene Angel Loves You All," and as the room got progressively dirty, I would replace the word "loves" with some other appropriate word, such as "likes," "hates," "likes (but only as friends)," or "it's complicated." This usually works. The students notice this and empty the trashcan within a day of the status changing to "hate."

Today I was walking to my room and saw this poster in the hallway. 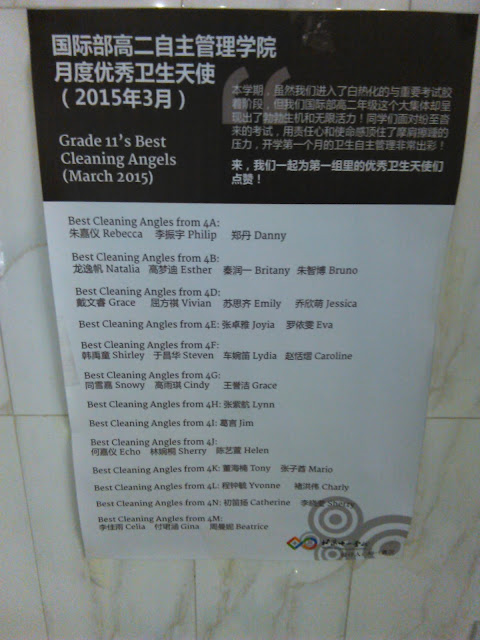 I was never asked who my best cleaners were, so how would they know? I have another teacher in my room once each day, but the two students who won recognition from my room are my students, not his. And neither of these students stand out in my mind as especially diligent cleaning the room. One is a kiss-up who might clean sometimes if she thinks it'll make me write a better college recommendation letter for her next year, and the other stopped coming to school two months ago because of a health issue. I don't disagree that they are fine people, but they are being recognized for work they might not have ever done. Meanwhile, the actual students who empty the trash just saw someone else get recognition of their own work.

I'm thinking of making a video called The Recognition Angel, where I magically appear and beat brown-nosers and the credentialing bureaucrats who enable them. (And by "make a video" I mean "ask a kid to hold my camera phone while I pummel someone.")