Soon after we got married, we moved to an apartment a half-mile away from my work. We have always been a one-car family, so we said, "That'll be great because then I can just walk to work!" But instead of waking up like a CHUMP at seven FORTY-FIVE and WALKING for EIGHT MINUTES, I stayed in bed until 7:55 and just drove to work.

Since then I've had longer commutes, but usually still well below the national average of 25 minutes.

Even my bike commute in Kansas was under 25 minutes (except for coming home in the summer). Really, my only time having a real commute, where I was driving myself and couldn't do anything else, was when I spent a year teaching at a college 100 miles from my home. But even that was two days a week, and I managed to learn some Spanish and memorize long scriptures.

My commute right now is a walk across a soccer field. But my building is going to be remodeled and won't be available for the first half of next year. All information regarding the replacement location was closely guarded. We were told "it will be no more than a 10-minute walk away." But a quick review of what's within a 10-minute walk showed there were not that many options. Then students started speculating, telling each other, "I heard it'll be in Yizhuangzhen," which is a 90-minute subway ride away. Finally, with no fanfare at all, the announcement was made that we would be using temporary classrooms built in the campus library. 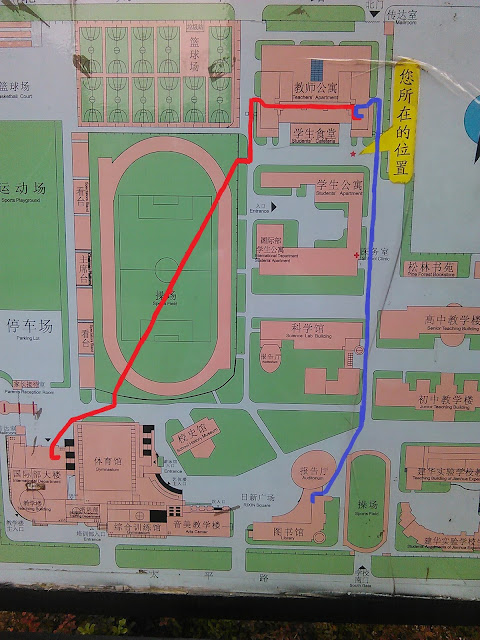 My commute just got 17% shorter.