My Wife's Birthday (Observed), Part One

I do a poor job with holidays. Part of the reason is that I'm usually broke. And part of it is that I tend not to plan that far ahead. And part of it is that I just don't think it's that important. And I could probably place some of the blame on my wife's responses to my presents over the years. When we were 14, I gave her some Christmas presents that included candy and, in an attempt at something more serious, a hair clip. I don't believe she ever wore the hair clip. A few years later, I got her a locket that had our picture in it. She wore it sparingly and later explained tactfully that she didn't wear it because it was ugly. Anyway, whatever the reasons, I've always phoned it in on each holiday, telling my wife I'd make it up next time.

Now that we had been married for 14 years, she was probably justified in wondering if "next time" would ever come. I was beginning to worry that one anniversary (or birthday or Christmas or Mother's Day), I'd wake up and find a note on her pillow explaining why she'd left. (At least I wouldn't have to return any presents, though, right?) Since I like her, I decided I didn't want that to happen. So last month, after phoning it in on Mother's Day (my presents included making her cook her own meals and ride the subway to and from church on her own with four kids), I resolved to actually do something for her birthday.

I started by discussing with our oldest whether she'd be okay being in charge over night if the parents were only a five-minute cab ride away. She said that would be fine. Next, I looked up recipes on Pinterest (this gave me an excuse to make a secret board, which was thrilling). Then I asked my students how to make a phone call in China (something our school employee "helpers" have never shared with us), and then once my students proved incapable of answering, I looked it up online. I called and made reservations at a restaurant we have been wanting to try.

I decided that we would celebrate my wife's birthday the day before her actual birthday, then spend the night out. The next day, her actual birthday, we would have dinner and dessert with the kids. The night before her observed birthday, she took two kids to a book club and I took two kids grocery shopping to get the ingredients we needed for her birthday breakfast the next morning. One of the kids mentioned that he didn't have anything to give my wife for her birthday. While I had a lot planned, much of it didn't involve the kids, so we got some presents while we were out.

We couldn't find syrup at either of our neighborhood grocery stores, so we had to WeChat my wife and have her get some. I was hesitant to do it, because it gave away some of the surprise, by we didn't have time to take the subway to the more-western grocery store where we'd find it, and she was on the American side of town that evening.

The next morning, I got the ingredients ready. Because our building is "authentic China," and that includes bugs everywhere, I had to do the preparation on the dining table, not the kitchen counter. 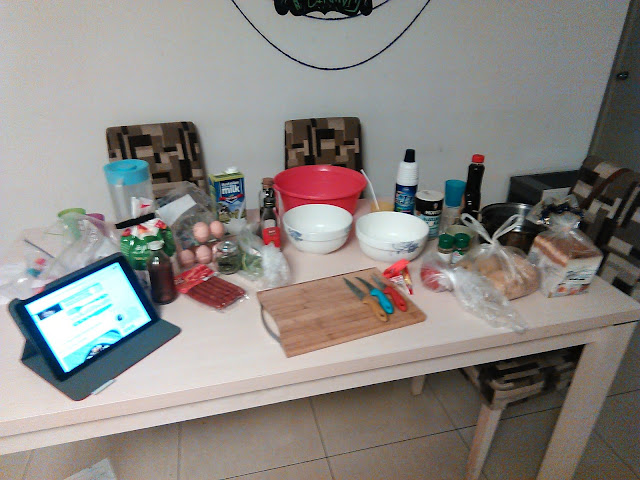 Part of running things past my daughter was asking if she'd be okay waking up early and walking down to my wife's favorite bakery to get her favorite doughnuts. Crazy Jane said yes. That morning, though, it was raining, and she'd been out late the night before at her book club. But it quickly became apparent that I didn't have enough time to do everything I needed before I had to be at work, so if there was going to be breakfast, I'd need Crazy Jane to run to the bakery.

In my prep work, I tried to find out when the bakery opened. Because it was a Chinese business, it made sure to make essential information impossible to learn. But it was a bakery, for Pete's sake, so it had to be open before everyone was heading to work, right?

It turns out, no, not really. So Crazy Jane walked down there and the employees let her stand inside while they started getting the store ready for the day. Eventually she realized they would have nothing to sell for a while yet, and she came back home.

While she was gone, I was tempted to cut back on the menu, figuring we didn't need to overdo it since we'd be getting some bakery food. But then I remembered that the reason this sounded like a good idea was because I was used to half-assing holidays. So I woke up Kid #2, Articulate Joe, to be my sous chef.

I was aware that my wife has an incredibly-low opinion of my cooking ability. She believes I would burn boiling water, if I ever had the inclination to try to get water hot. Although there are some advantages to this (like never being expected to cook anything), I also don't like her thinking I'm completely incompetent. I'm not a terrible cook, I'm just too lazy to ever try. Plus, I'm very undemanding when it comes to food. She still won't believe me when I saw that I would be very happy eating Craft Macaroni and Cheese at least one dinner every week. I hate spending time making food. It just seems so stupid. When I'm single (like when she's out of town), all I eat is one microwave meal a day. Even time spent waiting for a frozen dinner is a waste of time. But I sucked it up and put in an effort to actually do something with food this time.

Eventually my wife woke up and offered to help. I didn't want to make her make her own breakfast, but Articulate Joe did a crap job breaking eggs (he just sort of exploded them in the bowl, shell and all), so I let my wife help. I showed her the recipe we'd be following and, while I made the potatoes, she made the French toast and supervised Articulate Joe making the eggs. 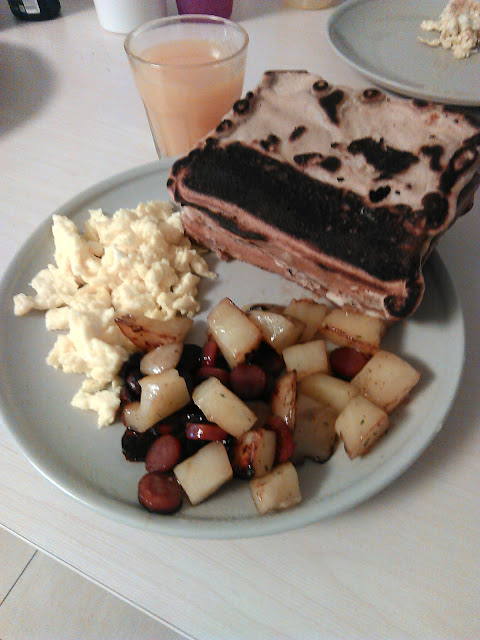 I had to make some adjustments for being in China. For instance, the potato recipe called for bacon, but since Chinese bacon creeps us out, I used a type of small sweet sausage we've had in restaurant dishes. I was also supposed to use something called Old Bay seasoning, but there was no chance of finding that, so I figured we'd just add some chili powder if they needed something more. And because of time considerations and the limitations of the sous chef, the eggs ended up just eggs and some milk scrambled together, without the tomatoes, cheese, or green onions I had planned on.

We finished just in time for me to leave for work. So I left the kids with instructions to do the dishes, and then we quickly gave my wife the presents we bought the night before: a fly swatter (because our poorly-sealed apartment is constantly harboring a handful of mosquitoes) and some socks (my wife wanted socks between no-show and knee-high length, which she'd had difficulty finding).

My work makes us work more than 40 hours per week, so they allow us four hours of "banking hours" each month to do whatever business we need to take care of during the work day. Most months that's just transferring money at the bank, but since we weren't going to be able to transfer money in June (I think I already explained this to you), I had all my banking hours left over. Since my Friday schedule has an empty four-hour block, and my school has adopted a more-liberal attitude towards using banking hours without approval as the term winds down and everyone needs to be prepared to leave for the summer, I had my wife meet me and we spent half a day at the mall.

We have three nearby western-like malls. The closest is smaller and the stores are more Chinese. Another is larger and nicer, but still fairly Chinese in the available stores. The third is harder to get to (quite a walk away from the subway), but it has our nearest H&M and Gap, and it has a Uniqlo, which is the most-normal of the fashionable Asian clothing stores (ones like Evisu, Chocoolate, and A Bathing Ape are too avant-garde for us middle-aged rubes). It turns out there's a bus that goes right from my school's south gate to the mall, so we took that bus (I'm an expert at taking girls on the bus for dates, remember?), and spent the afternoon shopping. 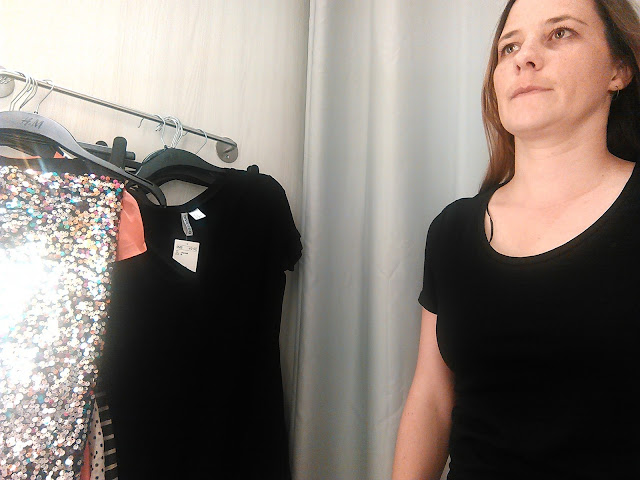 Scenes from a Chinese fitting room.

It turns out it's hard to leave parent mode when shopping. We saw a bunch of things for our kids in Uniqlo, but we weren't there to buy for our kids. We ended up getting a lot of stuff at H&M. Then we were supposed to get chicken fries at Burger King (that mall has our closest Burger King), but the lunch line was incredibly long and my wife was still full from breakfast. We took the bus back home, where the kids each got to pick something to give my wife as an additional present, and then I went back to work.

Uniqlo was one of my favorite stores in Japan! I loved it almost as much as I loved Muji...! I'm pretty sure there's on in New York City now, but on the rare occasions when I'm there, I've got too much stuff (and family) to see to bother wasting my time shopping...