My work had our passports for nearly a month, going through the renewal of our residency permits. The goal was to have them back to everyone before this past weekend, since it was a holiday weekend (Dragon Boat Festival) and lots of people would be traveling. Since you need your passport to stay in a hotel in China, our night out depended on getting our passports back from work. When I returned to work from clothes shopping, I found out that the passports were ready for pickup.

I finished my day and came home to pick up my wife. She wasn't quite ready yet, but she finished right around when the kids' dinner was supposed to be delivered. When we got down to our gate, we saw the pizza guy on his phone and guessed that he was calling my wife's phone, which we'd left with Crazy Jane. Most delivery guys say a bunch of stuff, then we say, "Běi mén," which means "North gate," where we will meet them. They say some more stuff, then we repeat "běi mén," they get the picture that we can't say anything else, they say, "Okay," we say, "Okay," and we go down to meet them. But sometimes a delivery guy doesn't understand why we just keep repeating "běi mén." We were a little worried about leaving Crazy Jane in charge of the entire transaction, so I called her to make sure she knew the delivery guy was there. She was in the stairwell coming down. I wanted to watch the transaction take place because it is kind of interesting watching your kids when they don't know you are. My wife didn't see Crazy Jane come out of the building yet, so she didn't even know it was happening. A student of mine saw me standing there with a suitcase and came over to ask me if I was traveling for the holiday weekend. I said, "Sort of." Crazy Jane recognized my voice and looked at me like, "Why are you spying on me buying pizza?" Then we walked to our hotel. 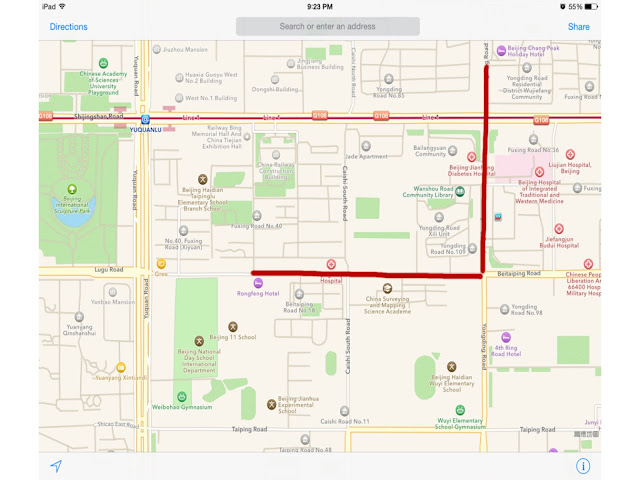 We checked in to our hotel. I had spent a tiny bit more (seriously, it was a very marginal increase) for a room with the word "executive" in the description. It turned out to be way better. We got all kinds of preferential treatment. Our room was great, with a super nice bed, desk, sitting area, and shower. 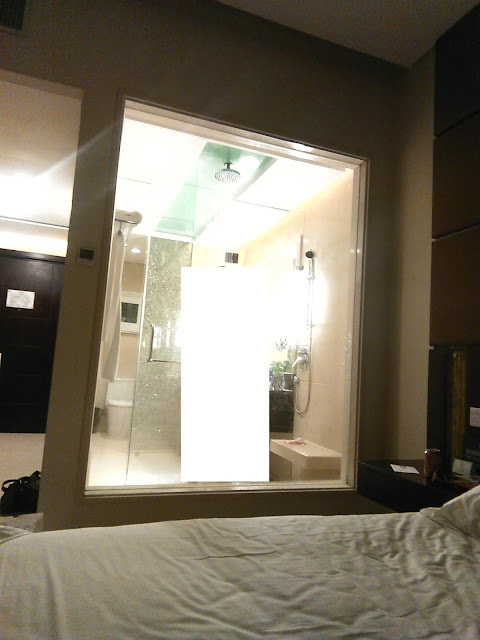 Although we were on the top floor, the hotel is not very tall, so we couldn't quite see our apartment, which is directly behind the peach-and-white building to the left of this picture. 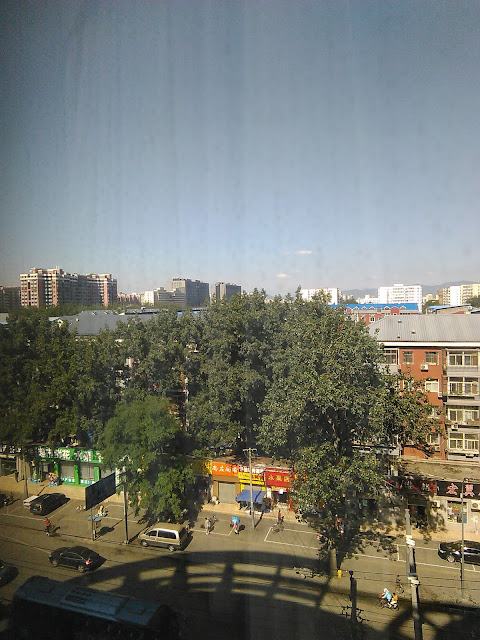 After checking in, we left for our dinner reservations. We could take the subway there, but the walk to the closest subway station from the hotel was kind of long. Plus, it would involved Line 1, Line 10, and Line 13, the three most-annoying subway lines we've every ridden. We could take a taxi there, but all the taxis on the hotel's street were refusing passengers for some reason. So we started walking up the street to find a taxi. We eventually ended up taking a bus to Line 6, which is a nice line because we get on at the terminus, so we can get seats. We completely avoided lines 1 and 10, which was great. But I did manage to take my wife on a second bus ride of her "fancy" birthday celebration.

The restaurant was great. Tasty Indian food, my wife's wasn't too spicy for her, and we weren't stuffed beyond comfort. It was really really nice. 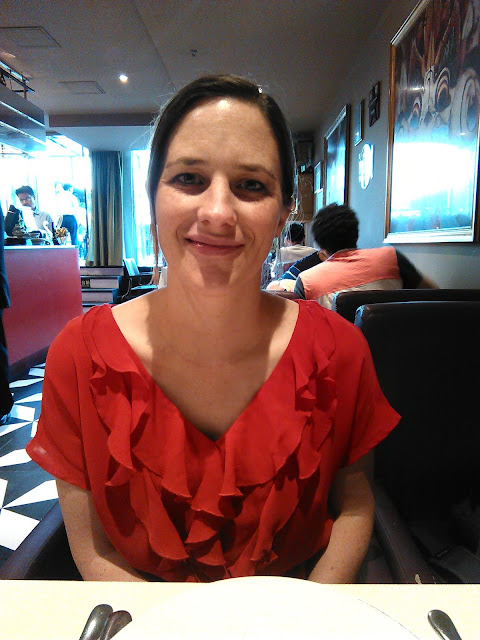 We were a little nervous because we both wanted to try an Indian restaurant but neither of us know much about Indian food. The menu did a great job explaining each dish very well. Then we were nervous again because my wife's first order was refused by the waiter. "That's too much food," he said. This made us hold back from ordering a dish we wanted to try, for fear that the waiter would again accuse us of gluttony. But I think we were happy not getting too full.

Outside the mall which housed the restaurant sat a sculpture that included an uncircumcised penis. Zoom in if you doubt me. (I took another picture where I zoomed in for you, but my cellphone camera falls to pieces anytime it's asked to zoom.) 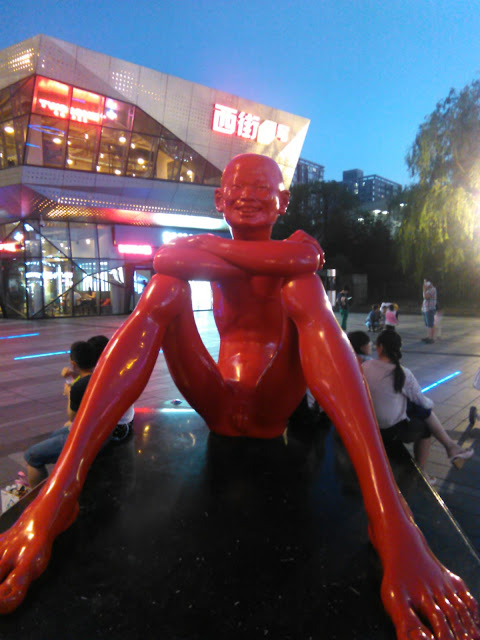 We hailed a taxi and showed the guy the Chinese address I'd written down, and I'd done well enough that he could read it. If making out in the back of a taxi wasn't on my wife's birthday dream list, well, then, I guess that part was for me, not her.