"Anyone Want to Guess Where I Got the Money?"

In the episode of The Simpsons entitled "Trash of the Titans," Homer fills a hole in the sanitation department budget by allowing other jurisdictions to dump their refuse in Springfield's abandoned mines. His family, however, assumed he was selling drugs.

Today I was helping my future officemate move a desk and we accidentally opened the desk drawer. Inside was a fair amount of drugs. 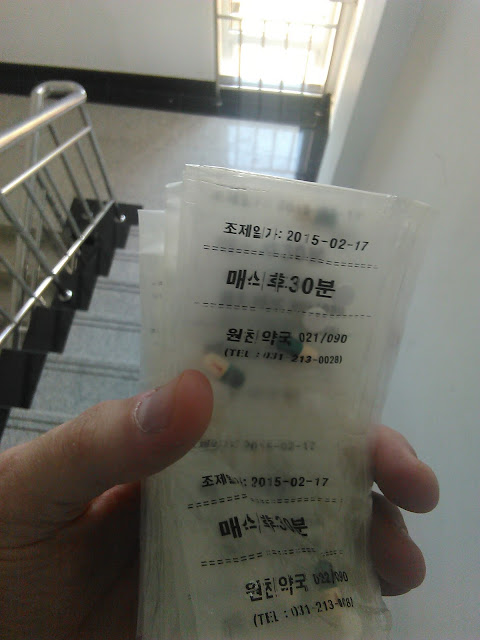 Okay, fine, it's medicine. But it sounds cooler when you say it's drugs, and since they're the same thing, I'm going to say it's drugs.

My officemate said, "Is it Viagra?" Because he's Slovakian, it sounded funnier. I said, "This is like the beginning of every terribly depressing gritty crime movie. We're like, 'Oh, ha ha, we found some--oh no, our lives are RUINED!'"

I tried to translate the packaging with my phone, but it wouldn't work. Then I realized it was Korean. I went to a guy on staff who went to graduate school in Korea, and he told me that the labels gave instructions on when to take it, the name of the company that made it, and when it was made, but not what it was.

I took it to my academic director (who up and quit this week, effective this Friday), and he said, "Hold on to it. Don't put it where students can find it." I took it to his soon-to-be replacement and he said, "Why don't you let [Unhelpful Liasson for Chinese Bureaucracies] know." I WeChatted that dude and now he's come and taken the drugs away.

What if it was that Limitless drug that I've always wanted?!?! I totally should have taken some!!!