I'm the coach for my 11-year-old son's baseball team this season, because the commissioner asked me to, and he's in my ward at church, and his wife was about to have risky brain surgery. If her brain was fine, I wouldn't have agreed to this.

Why? Well, part of it is boys in general. I think I explained before, when I became this son's Cub Scout leader, that boys between the ages of eight and 15 are the WORST. I think it's because they are ashamed of being boys and not yet being men, so they all act obnoxiously, which is how they think men are supposed to act. (In the boys' defense, some men in the world are pretty obnoxious, so it's not like these boys are completely off-base here.)

SPEAKING OF OBNOXIOUS MEN, now we get to the OTHER part of why I wouldn't have agreed. The other coaches are TERRIBLE. Oh, just awful. What kind of adult puts together a U-10 "super team" for the purposes of destroying other teams comprised of 10-year-old boys?

"Why is your 11-year-old playing U-10?! Are you admitting to cheating?!" His birthday was the day after the cut off, so he was still 10 when he registered, but he is almost definitely the oldest kid in the league.

One thing I've learned already is how to argue with the umps without arguing with the umps. For instance, in our last game, when my son was at bat, he took this pitch (which it just so happened my daughter caught on film). 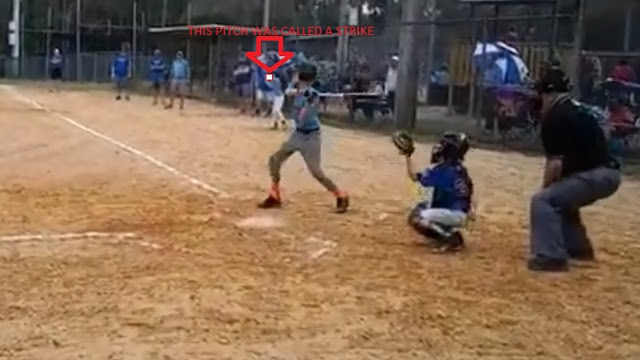 I was coaching third base. I said, "That pitch was level with his head." The ump glared my direction. So I called encouragingly from the coach's box, "Good job laying off that one!"

The game was a complete fiasco. When the continuous drizzle turned to a steady rain and the infield turned to soup, the other team used conditions to take the lead, then argued that it would be unsafe to continue. Yes, safety, the prime concern of a coach who starts the game with illegal bats (as the other coach did).