One thing that often goes overlooked: when the House of Representatives fails to grow with the population (as it's done for the past 100 years), the undemocratic aspects of the Electoral College will be magnified. When the nation began, the House had 65 representatives; added to the 26 senators, that makes 91 members of the Electoral College*. Thus, 71.45% of electors were based on proportional representation. Since then, the Senate has grown to 100 members. If the House had grown to maintain the constituent-to-representative ratio from 1911 (when the size of the house was capped), we would have 1,694 representatives, and the share of electors based on proportional representation would be 94.43%.

In fact, the constituent-to-representative ratio in the United States is extremely out of line with other democracies around the world. According to the Democracy Index, the U.S. is the 25th most democratic nation, but our ratio is nearly three times as high as the next-closest country on the list. With Excel and Wikipedia, I created this table. 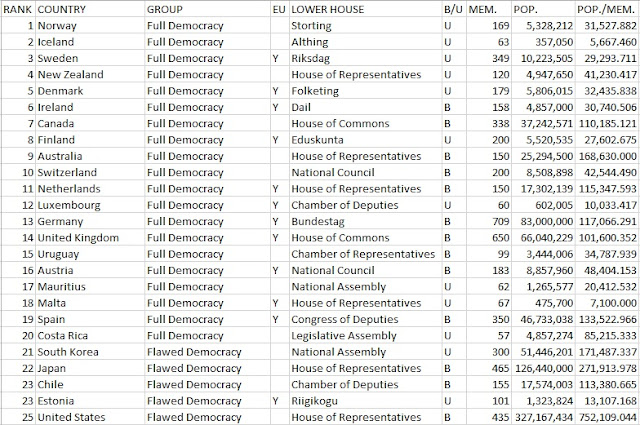 We have an even worse ratio than European Parliament, and they aren't even the citizenry's primary representative government.

"But there's not enough room in the House for more members!" Britain manages to fit 650 MPs into a hall slightly larger than the average Meineke waiting room; I'm sure we could figure something out.

In addition to increasing the number of representatives, I would require a neutral redistricting algorithm to prohibit the creation of pocket boroughs by gerrymandering. The existence of "safe districts" has given rise to extreme partisanship. Give me 700 or so representatives who have to actually appeal to the median voter, instead of 400 representatives who waive the bloody shirt. Then maybe we can get the indirect election of senators back and ratchet down the demagoguery in our politics.