Then, because there was too much clarity going on, they went through the rest of the business park and named the roads Baypine, Bayberry, and Baycenter. Sure, it helps you get to the right neighborhood, but good luck finding the place once you're nearby.

Because Floridians have never seen a stupid thing without thinking, "I can top that," I give you the Southpoint business park. 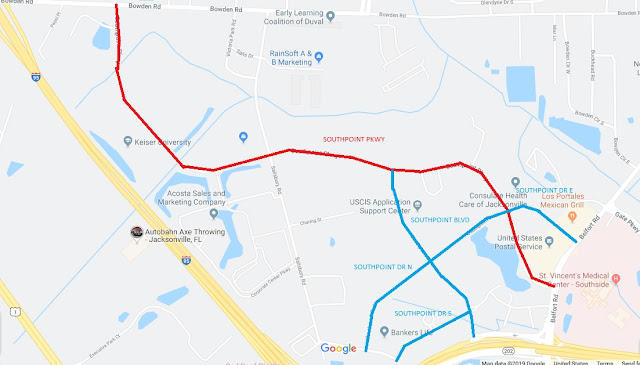 Also, WHY did they decide to make an intersection of Salisbury Road and Salis Drive, thus virtually guaranteeing that people will pronounce "Salisbury" as four syllables instead of three?

Another favorite thing to do in this town is to name roads after people who aren't important. And, like, FULL ON name the road after them: first, middle, and last name. Perhaps you grew up in a part of the country where you had to do something important to get a road named after you. Well, all you have to do in Florida is be a relative of a land developer! Maybe someday I'll write a post with the long list of instances.