Many Republicans want Coronavirus stimulus programs that involve supply-side tax breaks instead of cash handouts. Sen. Ted Cruz (R-TX) said this week that it's problematic when people get more money sitting at home than they did while they were working. The standard argument is that, since work is unenjoyable in relation to leisure, lowering the opportunity cost of leisure will lower the number of hours worked.

"But people won't work if they don't have to!" Supply curves slope upward, so any positive wage x will induce the supply of more labor than at wage x-i ∀ x, i. 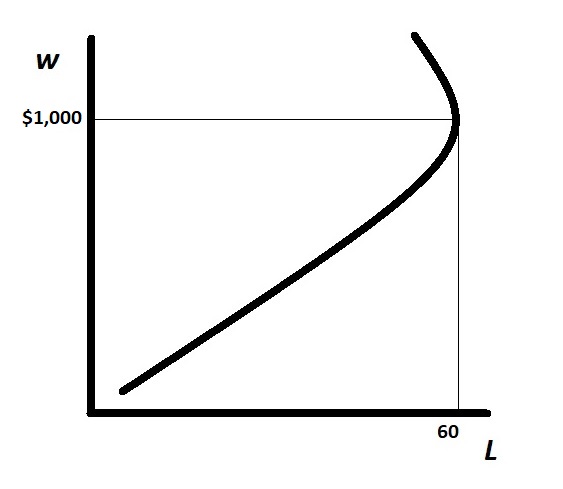 But Alfred Marshall made us all graph the exogenous variable on the wrong axis, so let's get it in the standard y=f(x) format. 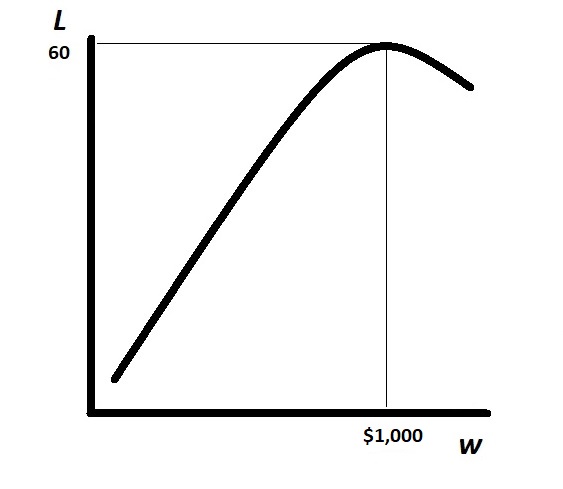 There. The Y-axis is showing labor hours supplied as a result of the wage. Higher wages induce more labor supplied until w = $1,000, and then workers will begin reducing their hours worked as the wage continues to increase. A possible function that would give us such a graph would be

Wage is the first derivative of income, so the integral of Equation 1 would show the relationship between income and hours of labor supplied. That would be

which produces the following table:

Hours of labor supplied increase as income increases until the backwards bend of the labor-supply curve kicks. (And at an increasing rate!) "Well, UBI is above the inflection point!" Given that most of the world's billionaire entrepreneurs continue to work, I think the inflection point is pretty high. Jeff Bezos made $13 billion this past Monday and he still went to work on Tuesday. I think we don't have to worry about UBI creating an army of shiftless layabouts.

The real problem is the tendency to assume moral failure as the cause of economic failure. There must be something wrong with poor people, or else why are they so poor? At the extreme, this line of thinking would lead to a regressive income tax; after all, if poverty stung a little bit more, maybe those bums would get their acts together.

This is pure sociopathy. Nobody is poor because it's enjoyable. Instead of allowing the poor to sit at home, UBI would instead make their lives less bleak. Sendhil Mullainathan and Eldar Shafir show in their book Scarcity how poverty is the equivalent (in my terms, not theirs) of a lobotomy. "Poverty reduces fluid intelligence and executive control" (p. 60). "The same person looked less intelligent and more impulsive when he was poor" (p. 58).

Most of the social problems that trouble the rich are the result of poverty. The cheapest way to solve drug, crime, educational, and moral problems is to give people money. Stop assuming moral superiority and alleviate poverty.